In the previous post we discussed general design patterns that put Vue and d3 together. This post will focus on how we improved the UI/UX design of the first prototype (shown above) according to the feedback from the UWRI team and the rest of The Policy Lab team. We will also discuss the improvements that made the site faster and more responsive.

Links to other posts in the series:

Feedback from the client

We showed the first prototype to the UWRI team and also internally to the rest of The Policy Lab team. The feedback that we received on it was: 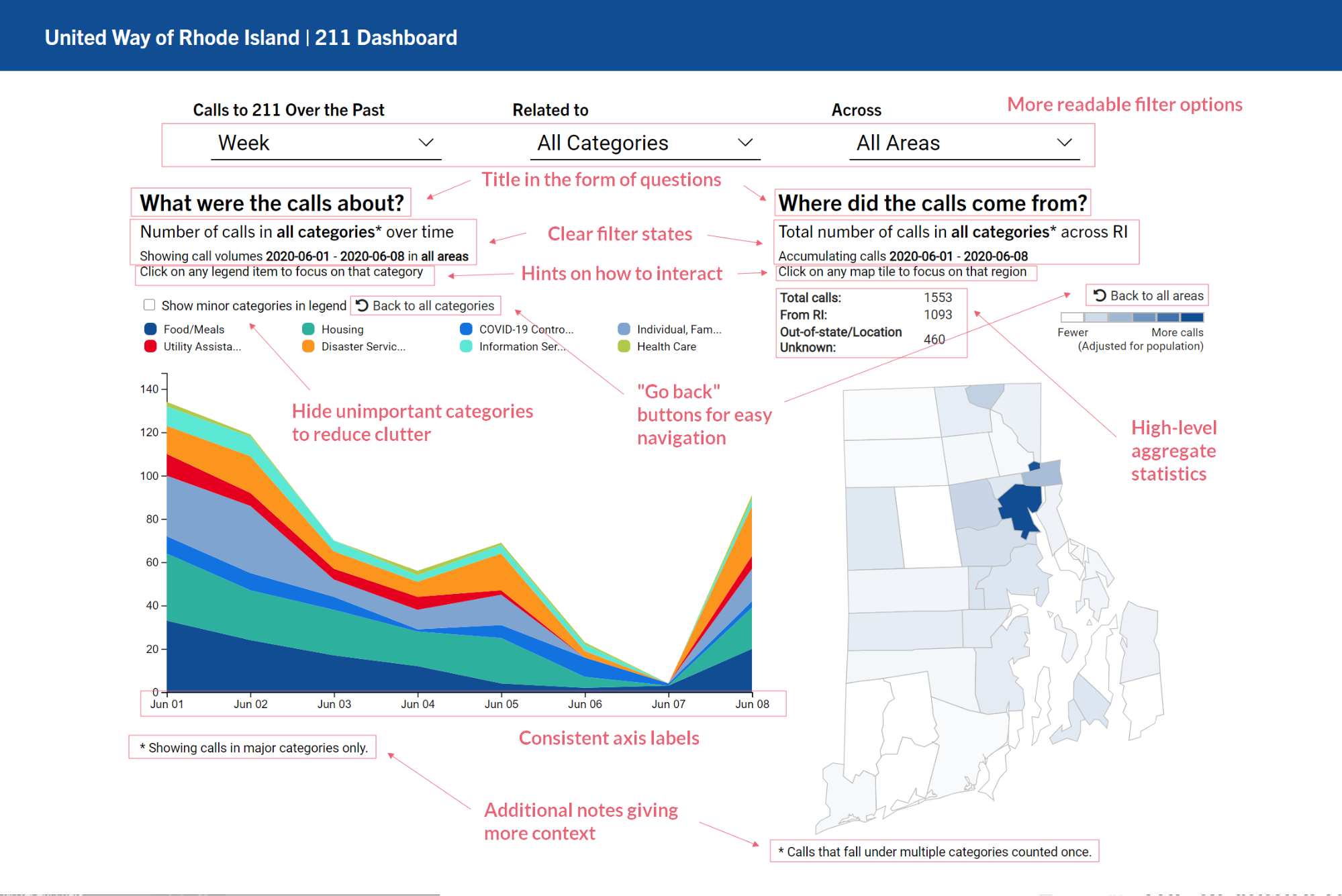 The above image shows the improvements that we made to the very first prototype of the dashboard after receiving stakeholder feedback. Some of the major ones are:

One thing that significantly impact user experience with a Web app is the performance. Unfortunately, because the dashboard app has to load the 211 call data file before it every component starts to render, there can be 0.5- to 2-second delay before the charts start to show up, a noticeable lag which can significantly affect user experience. Are there ways to reduce this lag?

Yes! The "tidy/long" data format is the culprit here. The long format, although often preferred in analytics with Python or R, it is more preferable to use the wide format in this context. There are a few reasons for this:

After we switched to the wide format, the size of the data file was reduced from 2,518KB to a mere 131KB. We did have to rewrite some code in the filterData functions for the component for each chart, but that also became easier. No longer did we need to use d3.nest() function to produce aggregates for the stacked area chart. We did need to reshape the wide format into a list of objects that can be used with d3.stack() to produce the data for the stacked area chart, but that can be created on-the-fly with the following two lines:

With these changes, the dashboards now loads instantly and is more snappy than ever, due to the reduced load in reading and restructuring the data.

This wraps the process in which we designed and built the 211 Dashboard for United Way of Rhode Island. We hope you enjoyed reading about this process! If you have any comments/suggestions, please feel free to drop us an email at thepolicylab@brown.edu to discuss it with us!

How to cite this Reflection: Xu P. (2021, February 24). The Making of a Dashboard - Part 4: Refinements and Stakeholder Feedback. The Policy Lab. https://thepolicylab.brown.edu/reflections/making-of-a-dashboard-part-4

zentables01 What is ZenTables? Data scientists often need to report descriptive statistics presented in neatly formatted tables, which is a process surprisingly not well-supported by either Python or…

I’m excited to welcome y’all to Reflections! Before I explain, you need to first notice that our website is growing. You can learn more about our projects in, well, in our new Projects section! There…

The Making of a Dashboard - Part 3: Rendering the Visualizations

In this post, we will cover the details in creating the data visualizations used in the United Way Rhode Island 211 Dashboard to reveal patterns in 211 calls. The previous post described in detail the…

Sign up to get updates on projects, events, and new episodes of our podcast, 30,000 Leagues

Check out our podcast